There are many styles of debating, but we conform to a basic format.

Both speakers are alloted 15 minutes to set out their arguments. The Proposer goes first, followed by the Opposer. The Chairperson then invites audience members to speak for up to three minutes on either side of the motion.

Finally, the main speakers are given 5 minutes each to sum up their case, with the Opposer speaking first followed by  the Proposer.

A vote is then taken to decide if the motion is passed or lost.

Debating is not a public speaking competition. If that were the case we would struggle to find speakers for both sides of a motion. It is more an exercise in examining issues from every angle. While there are at least two sides to every argument, public sentiment can prevail over a good case however well it is presented. On some occasions we hold a straw poll to test opinion before anyone has spoken. For a speaker it can be a small victory to have moved votes to support their argument.

The notes provided here will help prospective debaters prepare and deliver their speeches. 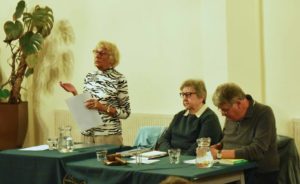